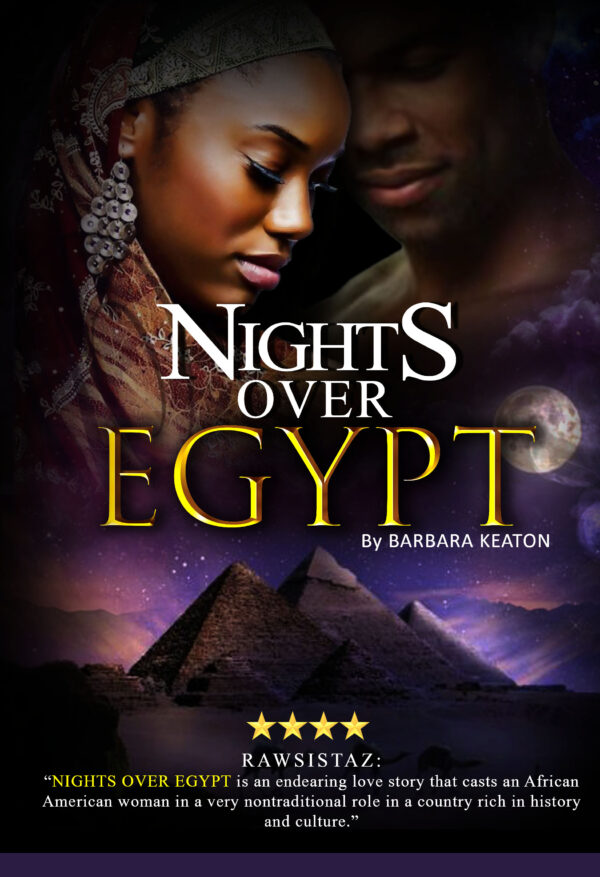 Ashalon is a professor of Egyptology at Cairo University in Egypt and he is none too happy to learn that another American is coming to his country to conduct a dig among the ruins of his ancestors. He vows to make it difficult for this foreigner, who has been given permission by the Supreme Council of Antiquities … at least until he meets the American, Corina Camden.

Professor Camden is searching for mummified remains from the Twenty-first and Twenty-second dynasties and is hard pressed to hear her every move in Egypt would be supervised by some professor.

Corina and Ashalon are each surprised by their reaction to each other as they set across the blazing desert, captivated by their love of antiquities and unknown passions.

Nights Over Egypt is a story of archaeological digs, rich culture and buried passions.

Book Review from The RAWSISTAZ Reviewers
4.0 out of 5 stars In Search of an Egyptian Tomb or Egyptian Love

For years Corina Camden has been the baby everyone doted on and the geeky little girl of the family, with the exception of one night when she was transformed into a raving beauty to attend her high school prom. Her date was arranged by her older brother with plenty of threats and instructions. The date was magical a one for Corina considering the response she was getting from her classmates and her escort. She listens intently to him as he describes his Egyptian homeland and his desire to be an archaeologist, echoing similar desires she herself has dreamed of doing.

Fast forward several years and Corina is all grown up and a well-known professor of archaeology in the United States. She has been offered the chance to participate in an excavation in Egypt among the Royal Tombs of Tanis. The honor is one that hasn’t been granted in ten years and will establish her as a serious Egyptologist. It is of little consequence Dr. Ashalon El Asab will be supervising the dig; she only hopes they can get along.

Upon meeting Dr. El Asab, they each get a vague feeling of familiarity. There is one thing for sure; they are both instantly attracted to each other. However, Corina recognizes a personal involvement could only lead to trouble, so she resolves to fight the feelings. Working in close proximity with fireworks looming in the background, the dig may result in more then ancient artifacts to secure.

NIGHTS OVER EGYPT is an endearing love story that casts an African American woman in a very nontraditional role in a country rich in history and culture. I was captivated by the obvious research Barbara Keaton put into this project and the vivid imagery she used to bring Egypt, its people and its heritage to life. If I didn’t know better, I would’ve thought Keaton herself was of Egyptian decent. Her character development was excellent with even the secondary characters showing budding potential for an additional story or two. This is definitely a must have for the romance enthusiast. —-Reviewed by Brenda M. Lisbon of The RAWSISTAZ Reviewers

How Women of Color Master the Art of Persuasion to Win Big Battles by Dr. Raye Mitchell